“What is the deal with Bees? I mean come on, why are they so small? And why… do the like honey?” 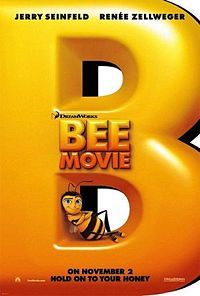 Okay, now just picture me saying that in a Seinfeld accent. Still not amused? Okay, let’s get to this review. I promise not to use too many bee jokes or one-liners, but I admit it will be hard to resist.  As every hardcore Seinfeld fan knows, most of the titles of his episodes were very simple and followed the same formula: The Contest, The Junior Mint, The Virgin, The Bubble Boy. So it was no surprise to me, that his movie was called, “The Bee Movie.”

Jerry Seinfeld plays a bumblebee named Barry Bee Benson (notice the clever alliteration) who has just finished college and is ready to head out in the bee world as a honey worker.  However, he flies outside with the other worker bees whose job it is to pollinate flowers and discovers the magic that is the human race.

Once out there his life is saved by a sweet woman named Vanessa Bloome (Renee Zellweger). He breaks a cardinal bee rule and speaks to her, and surprisingly enough, she’s not that freaked out by it. Bloome shows him all about the outside world and makes a startling discovery! Humans are making honey and selling it without prior bee permission! This enrages Barry and with the help of his new friend, decided the sue the whole human race. A hilarious courtroom drama ensues and Barry must deal with the consequences of the court’s verdict.

The Bee Movie is not for everyone. I wonder how many kids will really enjoy the movie. I know I have tried to get my three-year-old daughter to watch it a few times, and she lost interest rather quickly. I on the other hand really enjoyed the movie and I suspect many other fans of Jerry Senfiend’s comedy will enjoy the movie as well. Zellweger’s very sweet voice is soothing to listen too, and Patrick Warburton just has to speak and he makes me laugh. Three out of four stars.