“Loyalty to any one sports team is pretty hard to justify. Because the players are always changing, the team can move to another city, you’re actually rooting for the clothes when you get right down to it. You know what I mean, you are standing and cheering and yelling for your clothes to beat the clothes from another city. Fans will be so in love with a player but if he goes to another team, they boo him. This is the same human being in a different shirt, they hate him now. Boo! Different shirt! Boo!” – Jerry Seinfeld, The Label Maker

This routine by Jerry Seinfeld has always stood out in my mind. My whole life I’ve been a die hard fan of the Detroit Tigers. It doesn’t matter who wears the Old English D if the player is a Tiger I root for them. Kenny Rogers, for example, was not a popular player when he was on the Texas Rangers. Most thought negatively when his name was mentioned, however when the game to the Tigers, he instantly became a hero to the city, (especially after his magical postseason in 2006).

It also brings up a separate question: When is it okay to boo your players or your team? If your loyalty belongs to the team and not the player, is it okay to boo an individual athlete when they screw up? I think so because, in this situation, they are personally disgracing the uniform they wear.

Jason Grilli is the perfect example. He was a horrible player, I knew for sure he would give up a lead whenever he came in the game to pitch. When the fans booed him, he got what he deserved. On a personal level, I never boo (except extreme cases, i.e. Grilli), because it’s because I’m too optimistic with the Tigers. I always feel the team can pull out of whatever funk they are in.

I got a nasty comment back on my old WordPress blog when I posted something about the 2006 Tigers. It called me something like a fake johnny-come-lately Detroit Tigers fan. He asked me to post where I was in 2003 (the year we lost 119 games). He also wanted to know my Tigers Resume, whatever that means. I’ve never thought about putting a “tigers resume” together, but I’ll bite on his stupid comment and give you my resume. 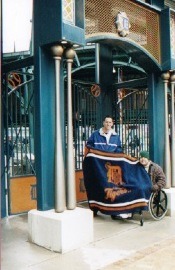 I have been a Tigers fan for as long I can remember. I still remember walking through the tunnel of Tiger Stadium when I was young and seeing the bright green grass shine off of the hot summer sun. Baseball has always been the sport of my heart and the Tigers have always been my team. I’ve held season tickets many times over, including 1999, 2000, 2001, and 2003. I was one of the first fans ever to enter the gates of Comerica Park, we got there on opening day at 7am and were the first in line!

My sister and her boyfriend when we went to see the Tigers play the Cubbies in Chicago in 2000. We won the game that day and some drunk Cubs fan grabbed our Tigers flag right after I took this photo (yes, we got our flag back). 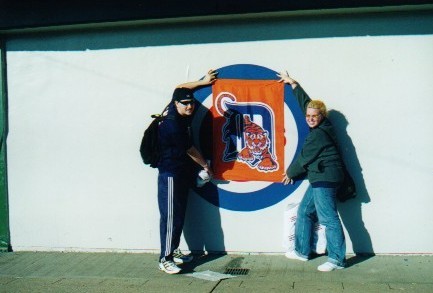