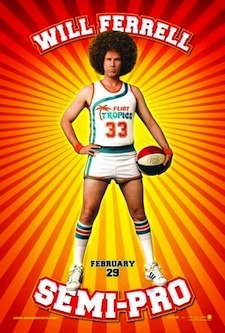 A good comedy is hard to achieve. For every Tommy Boy, there are a dozen Good Luck Chucks. Will Ferrell, however, has seemed to find a niche with the genre. His latest film is no different, by the end of the movie my stomach was actually hurting from laughing.

Set in the 1970’s, Ferrell plays Jackie Moon the artist behind the popular song “Love Me Sexy.” Instead of pursuing his singing career, he instead buys the Tropics, a struggling American Basketball Association team. He moves them to the nontropical city of Flint, Michigan, and names himself head coach, head promoter, and star player.

The Tropics are a fun team, who love the game despite their losing record. With a handful of dedicated fans, the team’s limbers by night after night getting the job done. Things change when news comes that the ABA would be closing it’s doors and merging with the NBA. Jackie Moon is excited at the thought of his team playing with the “big boys.”

A league-wide coaches meeting is called with the commissioner where it is learned only four certain teams would be merging. When Jackie Moon objects they agree to allow the top four teams at the end of the season to move to the NBA.

With the Tropics new goal of fourth place set, they trade their washing machine for a ringer to help the team play fundamental basketball.  Woody Harrelson plays Monix, a guy with a drinking problem who has an ABA championship ring to back him up.

Ferrell’s supporting cast is outstanding, but I was surprised by how much I enjoyed Andre Benjamin as Clarence “Coffee” Black. He has played a number of supporting roles in the past, but his work in Semi-Pro really stands out. He has the talent to be a major star in Hollywood for many years to come.

Kent Alterman, the freshman director behind Semi-Pro also worked with Ferrell as the Executive Producer of Elf. He did an excellent job of not letting the movie get to heavy. I was worried about this when I learned he was a producer of the horrible film “Balls of Fury.”

Alterman when doing press interviews for the movie was asked about the film having a dramatic side, as well as comedy, said,

“Rest easy once you spend ten minutes with the movie you will know we have no illusions of grandeur. We don’t take ourselves seriously and we hope the audience enjoys the movie for what it is a comedy with the attention of making you have a good time.”

And trust me, a good time you will have. The movie makes you laugh! In fact, it has the same envious problem as the Borat movie. I laughed so much I felt as if I missed other jokes! I plan on seeing this movie again once it is released in theaters because it was that good. Will Ferrell scores a monster slam dunk with this film. Let’s get tropical.  Three out of Four Stars.

One side note, I have really enjoyed all of the promotion they have put into the film. For example, Will Ferrell did a Sports Illustrated swimsuit photo spread as Jackie Moon with Heidi Klum. During the super bowl, the also did a number very funny Old Spice commercials.  Just search youtube.com for “Semi-Pro” and you will find many of them.